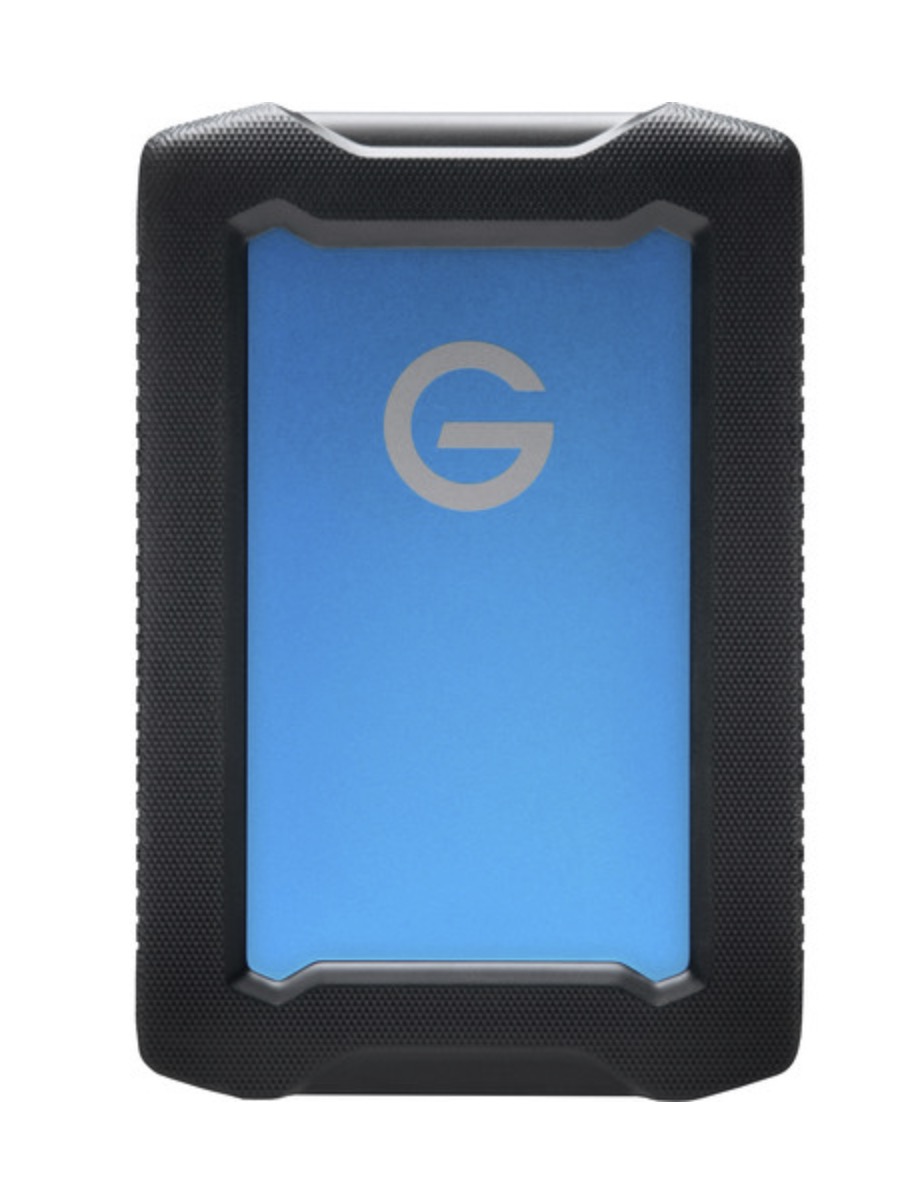 Hard drives are a lot like opinions – everyone has at least one. For the serious, traveling photographer, hard drives are the life blood of any expedition. Without having a safe, secure, reliable drive to use to backup your files, your once-in-a-lifetime trip to wherever may turn out to be a major disappointment if your cards fail or if you just rely on copying them to your laptop.

I always like to carry a hard drive (or two or three) with me when I travel. I actually label the drive with a physical adhesive label called – you guessed it – TRAVEL DRIVE.

When I am on a remote job, my workflow goes like this. I copy my SD memory cards to my Apple laptop. I then copy those same contents to a portable drive. Lastly, I have enough memory cards that I don’t need to format them in the field, so essentially, at the end of each day I have at least three copies of each photo.

Since some of my jobs involve expensive and extensive travel arrangements to exotic locations, I am not likely to be able to get the exact same shots again if my files get corrupted and I don’t have backups.

I always (without exception) have the hard drive on my person, regardless of where the computer and memory cards are stored. When I feel that hard drive in my pocket, I know that I have at least one safe copy of my images should my laptop and/or cameras/cards get stolen, lost or damaged in transit.

I have used a variety of portable drives and decided to take the G-Tech 4TB Armor ATD drive for a spin. I don’t like to use cheap hard drives for this important task and I especially do not like to take standard drives with me that aren’t designed for travel and the potential abuses that can follow.

So the first thing I wanted to check out was how rugged the G-Tech drive really is. It is billed as an “all-terrain” drive that can take a beating. The product is built with a triple-layer of shock resistance. It contains a rubber bumper, an aluminum enclosure and some internal shock mounts. The drive is rated to withstand 1000 pounds of pressure and drops of up to 3.3′ on a carpeted or concrete floor. It is also IP54-rated, which provides protection against rain, sand, and dust. 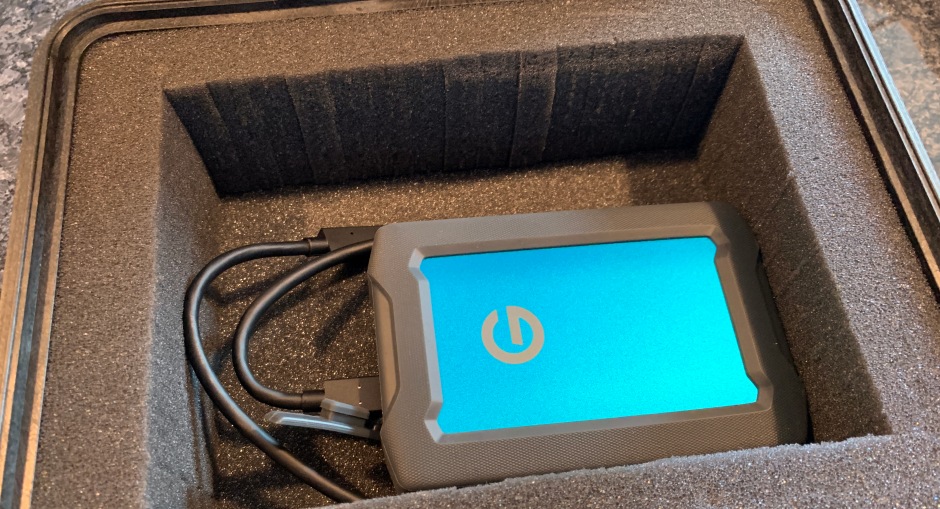 I didn’t really have a way to test the rain and dust resistance claim, but if it has the IP54 rating, then that’s good enough for me. Now on to stuff I CAN test…

While I do not have fancy scientific test gear to test all of manufacturer’s claims, I do have my personal years of experience as a clumsy idiot to draw on! I first tried to ask myself “How would I screw this thing up?” What immediately came to mind is that I might sit on it. While I am indeed President of the Horizontally Challenged Photographers of America (That is a joke designating the fact that I am fat) I do not weight nearly 1000 pounds. In any event I decided to sit on the drive – using a variety of chairs. I hurt my butt but not the drive. So as far as I am concerned – the crush test is passed. But now to my specialty – the drop test. How would this work for me in real life? I’d have the drive on the table in the hotel with my laptop and would carelessly knock it off the desk and onto the floor. So – you guessed it – that is how I tested the G-Tech. I sat it on the desk and then brushed it off the table where it landed with a thud on my very thin carpet. I picked up the drive, connected it and it worked like a charm. I tested the drive by dropping it from the back of my pickup truck bed to my linoleum garage floor. Another thud but once again, the drive was not damaged. Drop test passed.

With my concerns about ruggedness set aside, I tried using the drive to see how it performed. I have the 4TB version, which is more than enough storage for any particular trip I might take. It is powered by the computer via the supplied USB-C cable which is nice, because dragging around another power brick is not something I would look forward to. The G-Tech is rated for transfer speeds of up to 135 MB/s.

To test this, I used BlackMagic Disk Speed Test by BlackMagic Design. I ran it a few times and the fastest speed I was able to get was 119.6 MB/s. That is just shy of the benchmark from G-Tech but still plenty fast for my needs.

I loaded about 500MB of photos onto and off of the drive and found it performed very well. It was attached to my iMacPro via USB-C.

While I didn’t test it on a Windows machine, it is compatible with both Windows and Mac straight out of the box and does not require any reformatting.

I do want to mention that I saw a few reviews of this unit where people complained that the cable between the drive and the computer was not secure. That could be a problem if true, so I tested that too.

If the cabling system was too loose, you cannot prove it by me. See the photo below. I am holding the cable, which is attached to the drive, but I am not holding the drive, ergo – the cable is strong enough that I was able to lift the drive by the cable. I think that this is a non-issue. 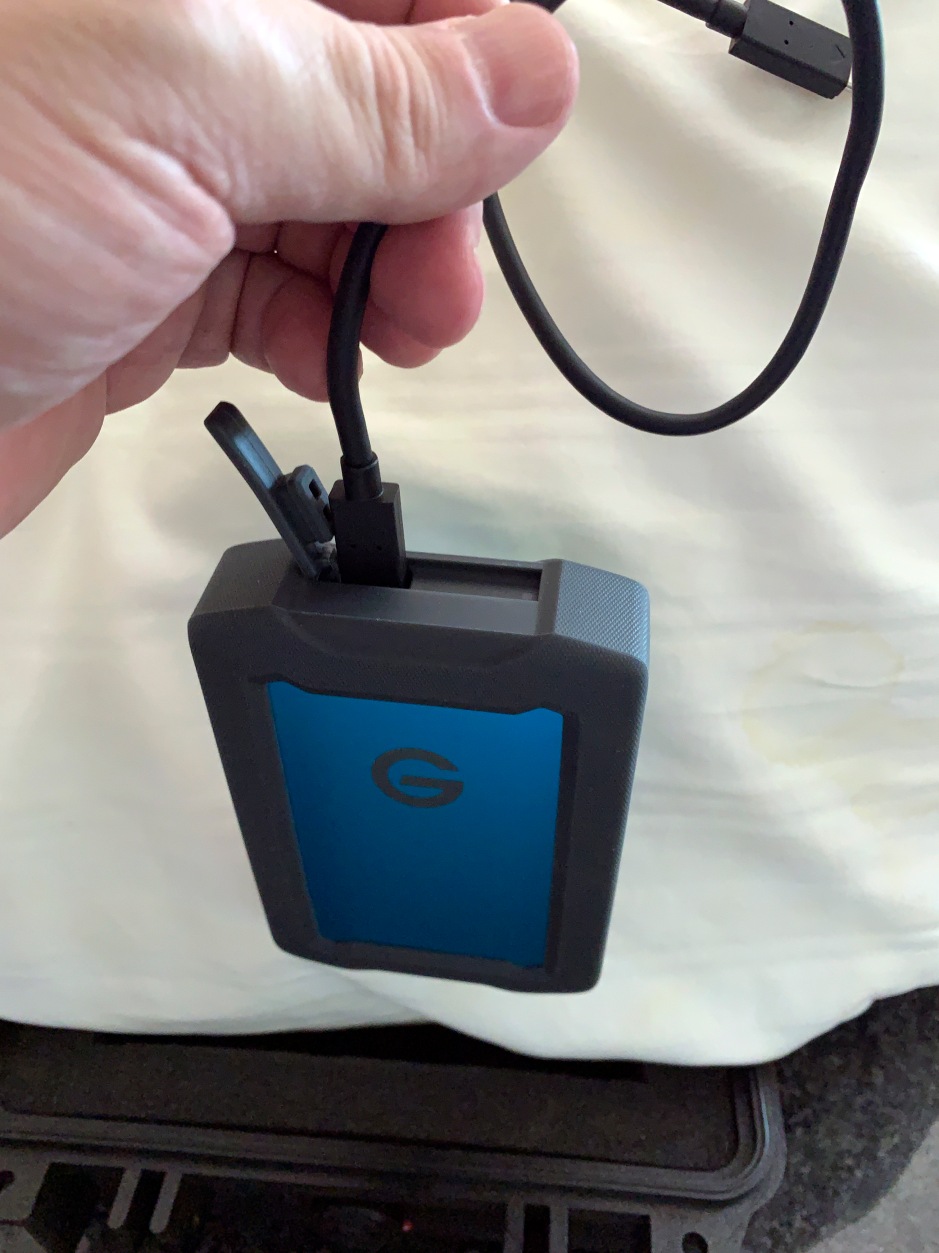 I think the G-Technology 4TB ArmorATD rugged drive is a good value. G-Tech is a well-known company with a great track record. They stand behind their products. The ArmorATD comes with a three-year limited warranty and unlimited free technical support by representatives experienced with the latest content creation applications. It also comes with a cable that will fit USB-C computers but there is a traditional USB adapter supplied for those that have older systems. For $170 it offers a lot of bang for the buck. It’s also available in 1TB and 2TB configurations for $90 and $120 respectively.

Up until this point I have used a similar drive from LaCie but I think that the G-Tech, being $70 less, makes it the better value.

So what’s my verdict? Those who are new to my reviews may appreciate my rating scale. I have three basic ratings.

(FTC disclosure – I received this review unit from B&H and was told to share my honest opinion – which I have done. I was not asked to allow G-Tech to read the review before published nor did they put any constraints on my approach. I can tell you that I liked it enough that I ordered another one as a backup.)